Reflections on three decades of optometry by Simon Albright 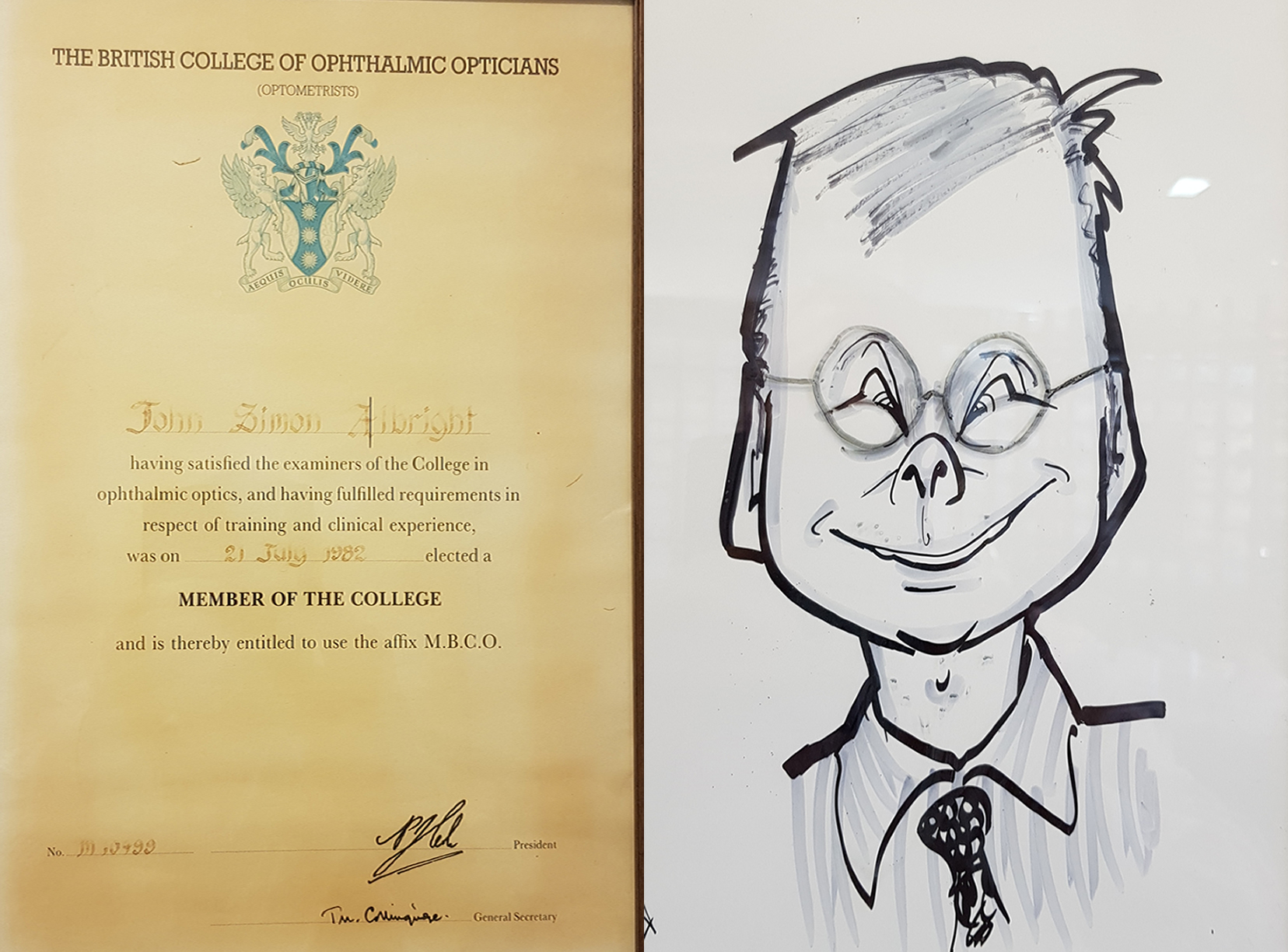 This blog is going to be one of a series, taking us from some aspects of my trade, advances in patient care, surgery etc. over the last three decades.

Age and maturity is something that happens to everybody in the entire world, except of course, me.
Indeed it even happens to my optometrist's qualification certificate, 21 st July 1982; it looks decidedly old and and faded, not that its on display any more as I swapped it for the picture above right.

My father still works at the age of ninety two so, I consider myself to be roughly in middle of my career pathway, which is just as well as I have recently spent £70,000 upgrading what was already state-of-the-art eye examination equipment.

It is now possible to examine a retina on a near cellular level and pick up disease with much more accuracy and at an earlier time than ever before. Also , just to keep my little grey cells active I have just completed my continuous education training for the next three years, two months into the cycle.

On a slightly less comfortable note I tested my own eyes recently, which is something I always do , and got the prescription completely wrong, which I don't normally do.
Further I miss diagnosed my self as having dry eyes, they were sore particularly in the evenings after work, when it was eye strain from wearing the wrong prescription- my wrong prescription. On a brighter note my dry eyes are fine now.

So this blog is going to be one of a series, taking us from some aspects of my trade, advances in patient care, surgery etc. over the last three decades.

When I started in 1982 average life expectancy was about 72 for men and in industrial areas, much less. Cataract surgery involved a week stay in hospital and modern type intra-ocular lenses were only just coming in, so we used to wait until a persons sight was very poor before referring for surgery and the visual outcome was very variable. It was at this time , a common sight to see the elderly walking around in massively thick, lenticular lenses, following cataract surgery.
Varifocals were only for the well off and N.H.S. spectacles were the rule. The style of these spectacles had not changed in twenty years, there were two models, a plastic frame called a 524, it came in 4 colours and every size, from small child to large adult for both male and female. It was also insanely boring.

There was also a rolled gold round metal frame, John Lennon style, called a 422-this is still popular today.
Very often children would be in tears at the thought of specs so I used to delay prescribing as long as possible. Nowadays specs are cool, multiple styles but only in one or two sizes and children are, for the most part, happy to wear them.

Lenses in those days were mostly made of glass and were relatively heavy. Modern,lighter, high index plastic lenses were just around the corner and are still being improved upon today.

My next blog will be about the changes in cataract surgery over 30 years.